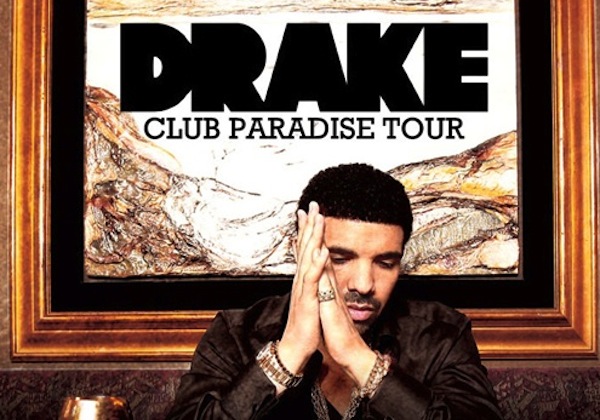 November 10th 2011,
had to be one of the best days of my life.
I met the one and only rapper/actor Aubrey Drake Graham
I have been a fan of Drake since  he was an actor on the Canadian TV show series
Degrassi: The Next Generation
I still can not believe that I actually met the guy that I watched on TV for so many years
and the guy that I played his mixtapes nonstop in my room and car…. 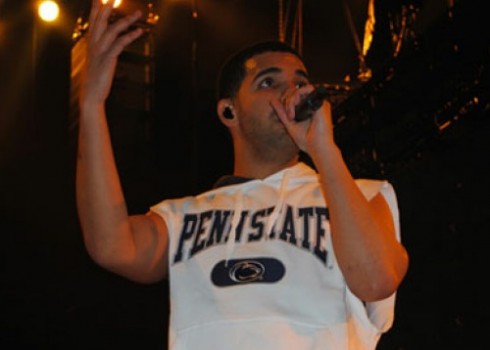 Drake  kicked off the anticipated
Club Paradise Tour at Penn State during a time when the school
was going through a lot of controversy surrounding the issue of
firing Joe Paterno and Graham Spanier because of the Jerry Sandusky sex abuse scandal
Penn State students engaged in a riot
when it was found that Joe Paterno was fired as the head football coach at Penn State.
The riot happened a day before the concert and many people thought it would be cancelled
The rumors were not true and the concert was still scheduled to go on (WOOT WOOT)! 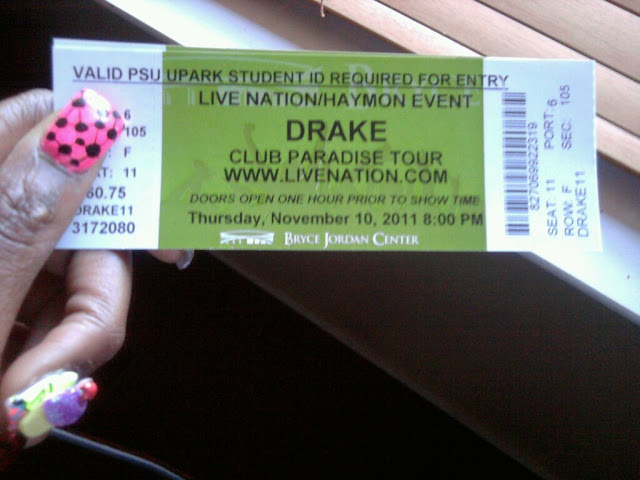 ““I want to truly thank you for being able to come together and have a great evening. Like I said, despite everything that’s going on around you, this is one of the greatest schools in the motherfu**in’ world. I love you,” he said to cheers from 15,000 concertgoers. “I’d love to come back some time, maybe with some of my family like Nicki Minaj. So while I work on making that happen, you work on being the beautiful people that you are. And until next time I see you, take care.” 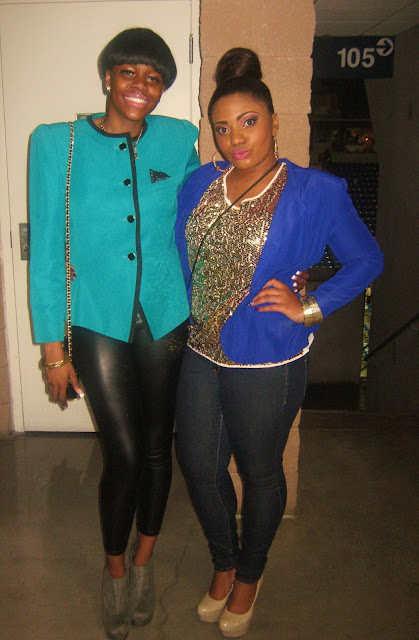 Some one asked me on Tumblr How I met Him
So I put My response Below: 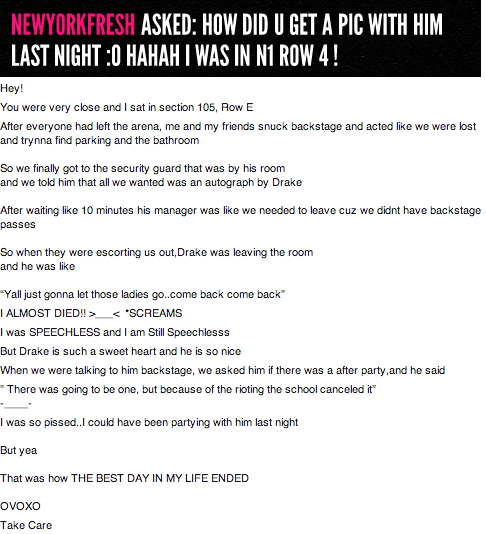 “We took a Picture Together I hope She Frames It..” –
“Over My Dead Body” by Drake ft.Chantal Kreviazuk 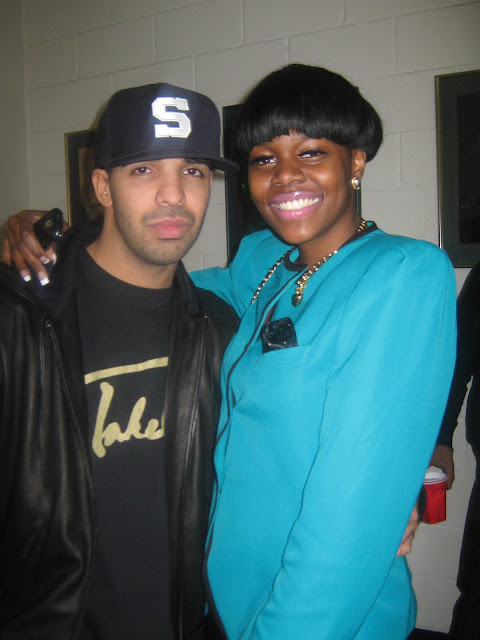 My Friend Alexis with Drake 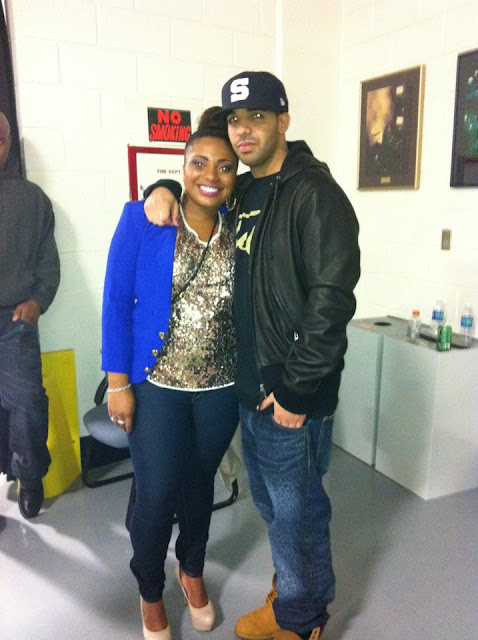 My Friend Maddie with Drake 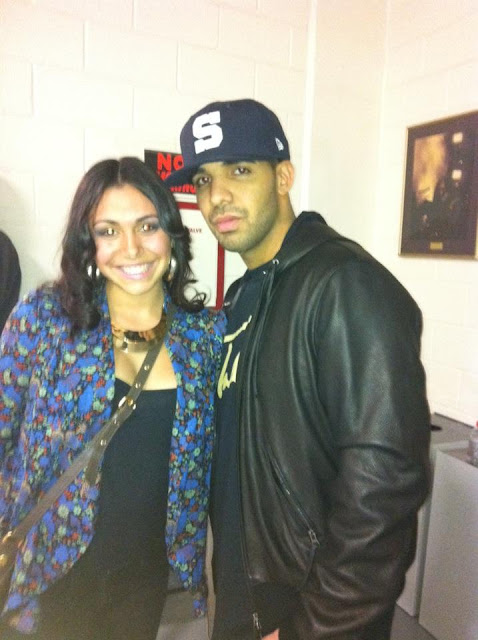 This summer I also won tickets to The Club Paradise Tour
in Washington, DC
for the May 25th 2012 show
I won the tickets in a twitter contest through his official fan site
Word on Road

https://twitter.com/WordOnRd
http://wordonroad.net/
They gave out tickets to all of the Club Paradise Concert Shows
(Which I thought was nice =)
When I found out about this on Twitter
I knew I had to give it a try!
The concert in D.C. was the day of my Brother Nicholas 15th Birthday
That was my main motivation to win the tickets 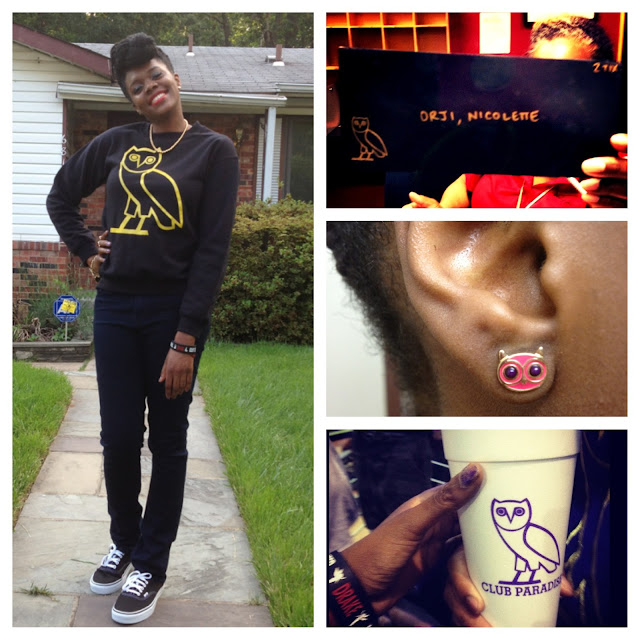 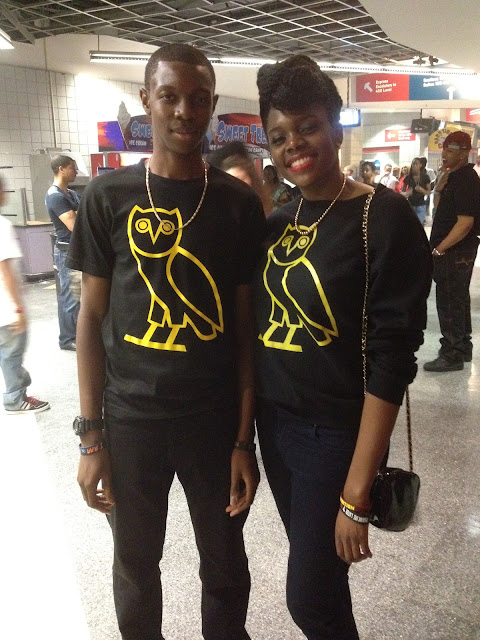 The contest was a day before the show..
All you had to do was be one of the first two people to
tweet the answer to the question
Word on Road tweeted on Twitter
Word on Road posted the question on May 24th, (the day before the show)
The Question was:
What date (Month & Day) was OVO fest on last year & who were the special guests (all of them) during Drake’s set?
I was the first person to answer the question
The second person to answer the question was a guy
I knew named Austin
he is really cool and actually went to
Penn State with me! 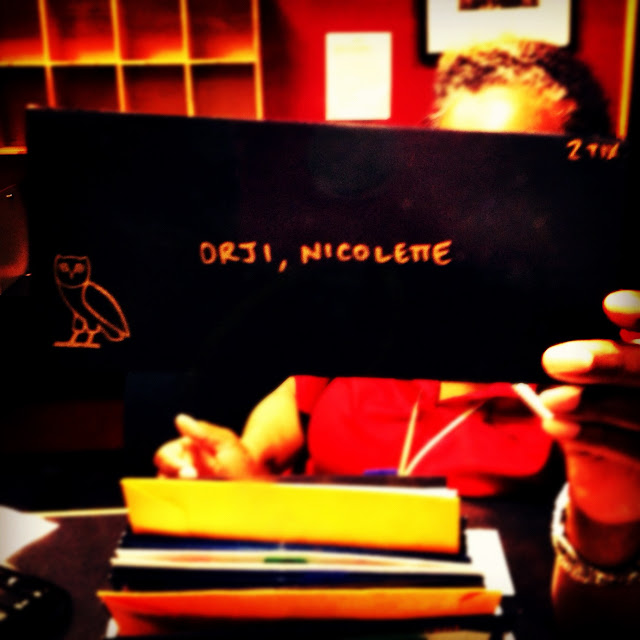 The concert was all in all good!2 Chainz, J.Cole, Meek Mill were some of the people
that graced the stage that nightI really felt like I was at a Club!Drake also gave Austin, his friend, my brother and I a Shoutout
(Check it Below)

” S/O to everyone with the OVO on over here,

I see you two and I see you too, right there my man,
and I see you my girl, you got the same color on
so Imma include you in the group”
Happy 26th Birthday Drake!!
OVO
XO
Take Care